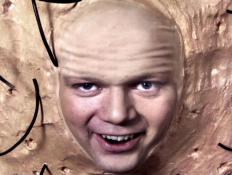 If dread Cthulhu wants a role in Joseph Nanni’s short, he’ll have to line up and audition like everyone else. Casting Call Of Cthulhu, takes us behind the scenes of a horror movie where an exasperated director auditions would-be monsters for his next film. As it turns out, none of the applicants have what it takes to frighten anyone. One guy has claws for hands and the scary thing is he thinks that’s normal. There’s also fishgirl who can’t perform under hot lights. The director’s frustration mounts as the endless parade of pathetic auditions continues. For him, the stars are wrong. The film culminates when a creature straight from the pages of H.P. Lovecraft walks in and blows the room away.