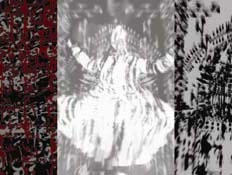 Crowded with Voices is an experimental short created by artist Anya Belkina and composer Scott Lindroth. It is inspired by the poetry of Rumi, whose 800th birthday is being celebrated this year. The film is intended as a tribute to Rumi’s teachings and art that appealed to people of many faiths in his lifetime and united them at his funeral. The central visual motif of the film is an image of a whirling dervish whose revolving motion is in harmony with the motion of the smallest particles in nature and the largest galaxies in the universe.