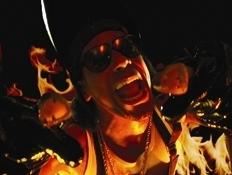 Homophobic rap superstar Terrier (pronounced “teh-ree-AY”) is tearing up the charts with the smash hit single “Kill Faggots” off his triple-platinum album hoMOFObic. Despite protests from groups like Homosexuals Organizing a Meaningfully Outed Society (H.O.M.O.S.), homophobia is America’s hottest trend.

Now Terrier plans to reach a wider audience by releasing a single featuring a sample from the deceased king of 80’s hair metal – Max Lightning’s “Teri Why.” But the rights belong to his eccentric homophobe widow, who demands Terrier reunite her with her estranged son, who happens to be the leader of H.O.M.O.S.