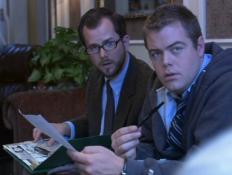 When Chance and Ben rang the bell of the house on Young drive they knew what to expect: another widow, desperate to reach her dead husband. That passed for normal in their line of work. But Kylie Harrison is far from normal. Convinced she’s plagued by evil spirits – including that of her husband Mark – Kylie is at the end of her rope. Things only get worse when Mark arrives from work to find his wife raving to a pair of strangers. Is Kylie crazy? Is Mark alive? More importantly, do Chance and Ben have any idea what they’re doing?