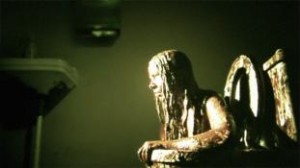 Every single day is the same for Casper Stipend. He wakes up, he goes to work, he cleans a lonely women’s room at the end of a deserted hallway in an indistinct building of sorts. Every day he cleans, and every day he finds the same filth and bizarre objects clogging his one duty; from dolls to bibles, there is nothing this commode won’t chuck at him. As he becomes more unhinged and disconnected from his own societal realities, he finds a connection in the last place he would’ve looked.