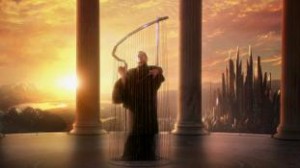 After centuries of rampant industrialization, the two remaining races of planet Zednok had to endure cybernetic modification to survive their toxic world. The struggle for dwindling resources finally plunged them into endless war. All were made to serve.

The great harpist Bohemibot served as a pilot. But like all on Zednok he was ultimately shattered by the war. Relegated to working in a military facility that recycled enemy bodies, each night Bohemibot would purge his nightmares and shoot them into outer space.

This story has been reconstructed from his dreampods and is presented in the language of Zednok.