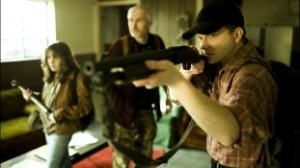 The reanimated infestation has reached a crisis point, overwhelming both local law enforcement and federal agencies. Left behind, alone, and abandoned by the authorities, the three survivors must deal with the multitude of ravenous undead just steps behind them.