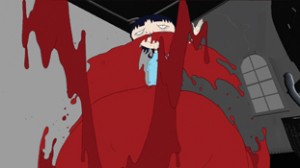 Lucy wants to kill herself is a flabbergastingly amazing animated surreal black comedy about a melodramatic writer/poet and her pet cats expeditious attempts to keep her from suicide.
Lucy is the quintessential suicidal writer/poet. Lucy doesn’t quite belong in this world and seeks sanctuary within the surreal breach between life and death, not that she’s very successful at embracing death for long. Her cat, Mishima, who hates Lucy’s self destructive behavior only a little less than he hates being left alone, could have been a good reason for her to stay around if she weren’t so self absorbed.