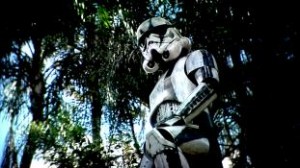 Set in the Star Wars universe during the time period between episodes 3 and 4, an elite soldier has been sent to track down and destroy a known threat to the Empire through intense ground battles and haunting imagery of death that surround the environment. The unsuspecting enemy to the new Imperial order has no idea what he is up against when the two finally meet for an action packed surprise ending.