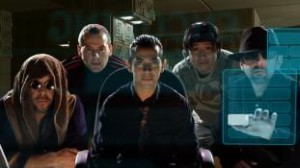 Welcome to The Scene… Inspired by the Wired magazine article “The Shadow Internet” by Jeff Howe, SHADOW.NET is set in the underground world of online movie piracy—a secret network of anonymous groups that compete to steal the latest films. Greg McKenna (Screen Name: Deckard) and the other members of an upstart group known as DMG are tired of being overshadowed by other groups with better access to stolen films. Deckard jumps at the chance to raise DMG’s rep with a huge score: Marvel’s latest release. But just like in any other high-risk heist, things don’t quite go according to plan.