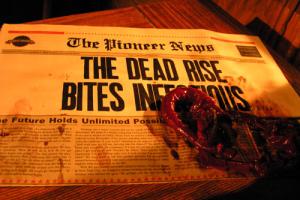 Zombie-cowboys have returned to their favorite Old-West watering hole after an undead breakout. While the group is ‘playing’ poker, we are allowed a glimpse into their reality. Lines are drawn, then crossed, and cheaters punished. A still-human bounty hunter arrives, and he’s all that stands between these ghouls, and their next round of whiskey!