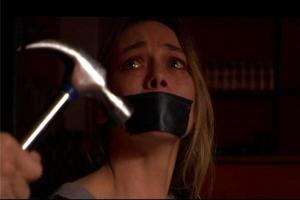 Sophie is not scared by horror movies anymore. One night, she’s kidnapped and she realizes that she is the wrong person. The kidnappers have made a mistake. The kidnappers are going to kill her, because they don’t want to have any witnesses. Sophie will try to escape and will kill one of them. But in fact, she kills her girlfriend’s new boyfriend who she was supposed to meet during the weekend. It was all a joke for her birthday party.