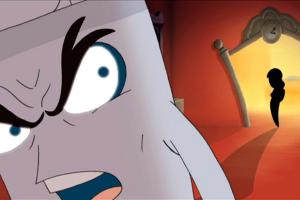 The late Jonathan Harris (Lost in Space, A Bug’s Life) makes his final performance as “The Bolt” and is the narrator of this screwy parody of How the Grinch Stole Christmas. The Bolt devises a scheme to take away Christmas from every last Screw. Can Christmas be saved for the Screws of Screwville? Harris is joined by his former TV co-stars Bill Mumy, Angela Cartwright, and Marta Kristen who portray the Ratchet family from a nutty scene from A Christmas Carol. The film also features the voice talent of Tress MacNeille (The Simpsons, Futurama).