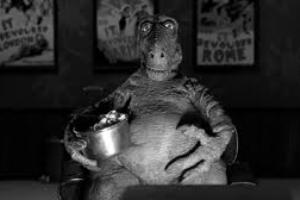 A day in the life of an unemployed B-movie monster, a lingering personified special-effect of the 1950s. Presented as a series of vignettes, “Bygone Behemoth” follows the title character as he putters around his house, laments being out of shape, calls his agent about work, reads the want ads, and contemplates the obituaries.

In an age where computer graphics are all too prevalent, “Behemoth” is a nostalgic tribute to the work of Ray Harryhausen, Willis O’Brien, and numerous other forgotten wizards. Like the Behemoth itself, the film needs stop-motion to exist; it seeks to capture the ephemeral quality of a dying art form.