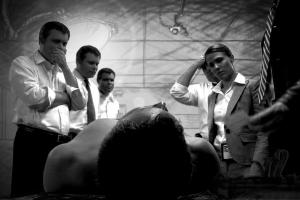 The City – 2064. It is a harsh future of legalized human cloning. Detective James Aidan stands on a city rooftop, looking over the corpse of one of his own clones. Under the body, he discovers a mysterious note indicating he is next to be murdered. It is the third time he has seen his lifeless face that day. How should one feel about the death of a clone? And who would want to kill all of him?