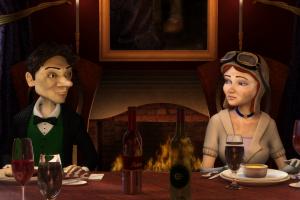 Before he became the overweight obsessive sadsack of his later years, the Penguin was a poet and a dandy, who threw lavish parties and told complex villanelles and was an expert at umbrella flight. Looking for love, he is introduced to a lovely nanny, Mary Poppins, who also prefers travel by umbrella. The results are not as he had expected; his hopes dashed by a mysterious stranger in a black cape.