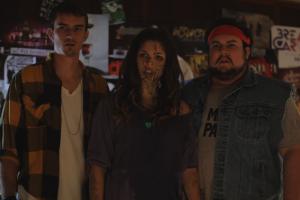 Small town punk rockers The Brain Deads have their first out of town gig. But there are a few problems: The venue is deserted, the promoter is a creep, their bass player has gone missing, and the only kids in the audience appear to be bloodthirsty monsters from hell. It’s gonna take a lot more than a few power chords and teenage angst to survive this night. Night of the Punks is a horror-comedy short film in the vein of fun 80’s classics like The Return of the Living Dead and Night of the Demons.