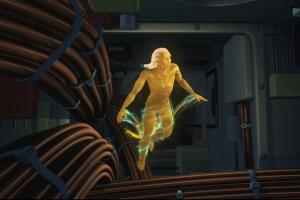 Quantum Quest: A Cassini Space Odyssey is CGI, 3D, science fiction, action-adventure film which interweaves animated sequences with actual space imagery captured from seven ongoing NASA/ESA missions. Its family-friendly tale focuses on a photon named Dave and his heroic efforts to save his people, who are caught in a galactic battle between the forces of good and evil. The film takes a unique and entertaining approach to science education by creating characters which embody scientific concepts and discoveries, making the movie fun as well as informative.