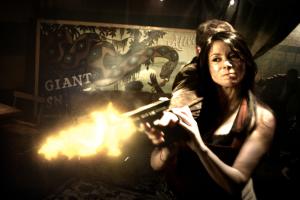 In this twisted modern day fairy tale, Zoe, a teenage girl, is lured into an after hours carnival tent by the sleazy rock-n-roll carney, Rimo; She gets more she bargained for. It is up to the mysterious Princess, the star of the new knife show at Roscoe’s Carnival & Freak Show to pull Zoe out of the wolf’s den that she has fallen into.