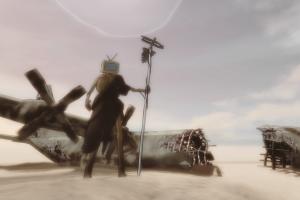 From an underground bunker a hooded figure lights a candle in the darkness, broadcasting warnings of the inevitable anarchy destined for humanity. He reaches for one of few remaining personal possessions and re-tells the story of his wife, one of the many who have fallen to the widespread plagues and fallout sickness. The man had been employed as a sentry guard for Octamed, a company that treated the infected and sick.

When the darker times came, they switched to processing the weak and dead. As his ailing wife succumbed to illness, he faced his greatest struggle yet: how to remember.