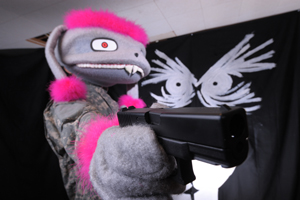 What evil lurks behind their googly eyes?

Stan Gable isn’t a bigot. He doesn’t hate anybody… except puppets. As a self proclaimed ‘fluff-o-phobe’, Stan’s worst nightmare comes true when a group of puppets move into the house across the street. As his suspicion turns to paranoia, Stan tries desperately to convince those around him that the puppets are up to something. Is Stan crazy, or is there something truly sinister about his cute and cuddly neighbors? A film chocked full of torture, bigotry, mutilation, terrorism, and adorable fuzzy puppets.