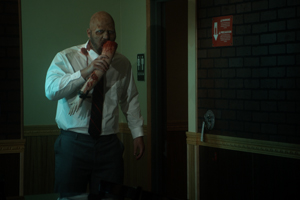 Written/Directed by Hillary B. Lavin; Produced by Tara K. Clark

Hiro Watanabe has the soul of a Samurai warrior. There’s only one problem: he was born 500 years too late. On the other side of the world. Life as a Teppanyaki chef in America is far from the heroic life Hiro imagines for himself. He makes do, envisioning his knives as Samurai swords, honing his skills with a blade. His dreams are routinely crushed by Dean, a snarky busboy working at the same restaurant. But tonight, all this will change. Tonight, Hiro will prove himself as he goes head to head with the walking dead!