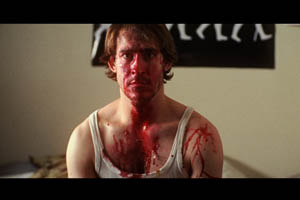 Robbie Diner (Guy Bradford) is an atheist, and he’s not afraid to show it. When Christ returns to Earth to renew the copyright on The Bible, he tests Robbie’s beliefs in non-believing—by exploding on his face. Robbie’s faith goes from one end of the spectrum to another, as he sees the light and joins the newly formed Church Of The Injectable Christ.

Director Justin Colautti (Chance Encounters, Official Selection, Hot Docs 2011) feasts on the absurdity of absolutes in a challenging and introspective satire that revels in the opiate of the masses.
Watch the trailer