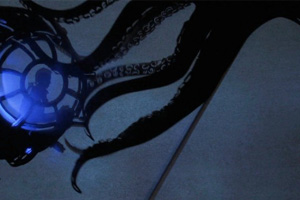 Victor Karloch receives a journal from a colleague who is involved in a salvage operation for a series of missing sea freighters in the North Sea. In this journal, Karloch’s friend describes his descent into the abysmal deep with the use of a diving bell and his encounters with the ghosts of a lost Templar Knights ship.

The Narrative of Victor Karloch is a Victorian ghost story puppet short film that utilizes 30′ tall rod puppets, traditional shadow puppetry, rotoscope, and rear projection to present the adventure of Victor Karloch, an alchemist, scholar, and ghost hunter, as he battles the supernatural forces of the Unknown.