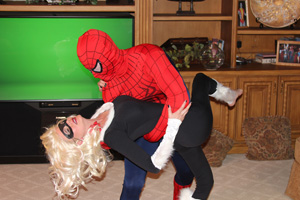 A newly invented Spiderman has recently turned to catching animals as opposed to criminals and has been recently awarded the Presidential Medal of Freedom. When he tries to take the television remote from his disinterested girlfriend, the Black Cat, who is more interested in watching romantic movies and the Vue, it becomes quickly apparent that the power struggle is much more than he bargained for.