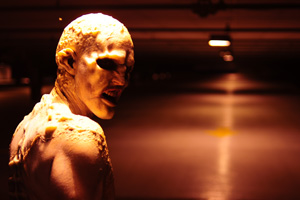 After the last glass of champagne is finished a young upper class couple departs from a wild night of partying on a roof top deck. While playfully flirting and speaking of innuendos, the angel of death, Azrael, stalks the couple in the shadows. The new beau mentions his sexual intentions for the night only to be disappointed by her response. Azrael speaks to them, manipulating their actions and words. Their conversation escalates into a furious argument as Azrael instigates, ultimately inciting a horrific act of violence. Only after fate runs its course can the will of God come into fruition.