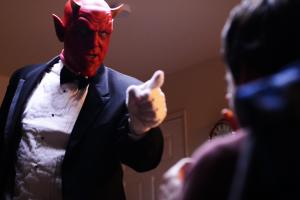 George is a timid freelance artist that has been hired by a famous heavy metal band. Plagued by artist’s block, George falls behind deadline and the band’s daunting front man, Gary, threatens to beat George to a bloody pulp. When George approaches the final hours before deadline and all hope seems lost, he is visited by Scott, an over-confident bipolar demon from hell. Through song and dance, Scott forms a bond with George in order to inspire him to make the most badass album cover ever!