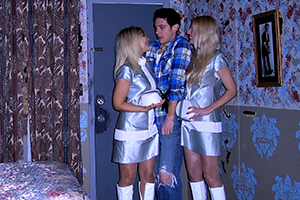 Two cute alien chicks come to planet Earth in search of new boyfriends when all the boys on their home planet Moe are wiped out by testosterone fever. They crash land their space buggy at a seedy Motor Court Motel where they are immediately smitten by local resident Roger in the process of being thrown out by his girlfriend, Cindy. With new attention and interest in her boyfriend, Cindy decides she wants Roger back and plots a plan to derail the aliens affection.