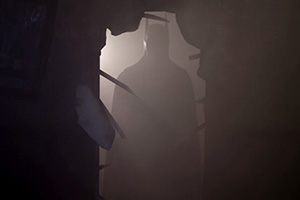 A psychopathic killer by the name of Victor Zsasz terrorizes a family. As the maniac toys with the little girls, a dark avenger from the shadows stops him before he can finish the job. Strongly influenced and based on a scene in the Batman: Cacophony series written by Kevin Smith.