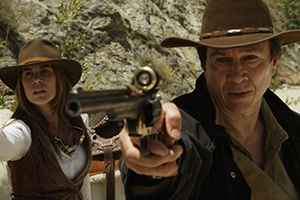 Cowboys & Engines is a steampunk western that stars Richard Hatch (Battlestar: Galactica) and Libby Letlow (Masked Rider). In an alternate 1876, Cade Ballard, the former Texan ambassador, encounters Guinivere Wheeler, a sexy gunslinger and con artist. And all he really wants to do is get to Mars.