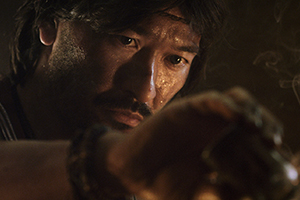 Dust is a story of loss and redemption in a time where humanity has become immutable and the world is changing at breakneck speed. In this harsh and unpredictable environment, where people have isolated themselves behind massive city walls, a socially marginalized tracker teams up with a black-market merchant to save the industrial society that has rejected his way of life.