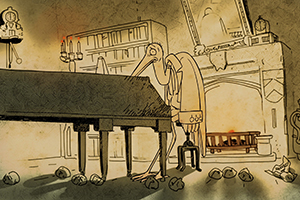 The Fallen Phoenix is the story of an established composer who struggles to write a masterpiece that pleases both himself and his sponsor. Ultimately, he realizes he has to choose between staying true to his art and pleasing those around him.
The fable of the Phoenix is used as a framework for the story. Though the Phoenix may fall in flames, his music lives on triumphantly!