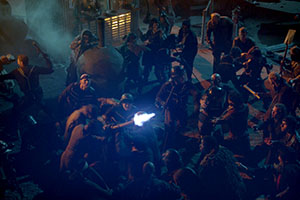 Helio is a short, visceral film centered on a post-apocalyptic underground society where miners work for light to survive. But when a dying rebel thrusts the unexpected onto an unassuming worker’s lap, all hell breaks loose. What begins as one man’s race to escape the hostile government quickly escalates into a city-wide uprising of the people.