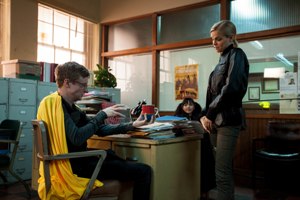 With super villainy spinning out of control the world has been forced to turn to the vigilantes they once feared in an effort to restore balance, creating a revolution in law enforcement: SPECIAL FORCES. Now, mortals and meta-humans must put aside their prejudices and unite… before humanity pays the ultimate price. But because life has a strange sense of humor, some of the “super” cops really aren’t all that super. Eugene is hands down the sweetest guy you’ll ever meet, armed with the ability to heat up small objects through pyrokenisis. He’s become the department’s coffee warmer. His partner Genesis, has the ability to project any image from the palms of her hands though her power has the embarrassing side effect of revealing her true emotions. Together with Eugene, she’s become the laughing stock of Special Forces.

However, all that is about to change…

Called in by mistake to help rescue hostages from a burnt-out factory, Eugene and Genesis discover their powers are a lot more than they’re cracked up to be. Now these two unlikely heroes are going to show the world what being super is all about.