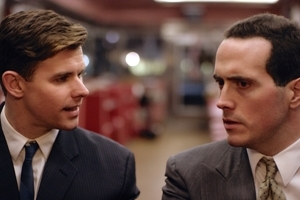 Split Ticket uses as its springboard an historical incident. In April of 1947, three months after being sworn in as new congressmen, John F. Kennedy, age 29, and Richard M. Nixon, age 34, traveled to McKeesport, Pennsylvania, where they debated before a civic group, went to a diner for hamburgers, then shared a sleeping compartment on the Capitol Limited overnight train leaving at midnight for Washington. That is the jumping-off point for a Twilight Zone-ish story about two American icons and future presidents who make a fateful decision.