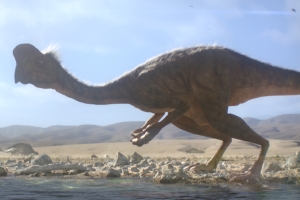 A small dinosaur called Citipati falls prey to a global extinction event caused by a meteorite impact. The fearful dinosaur fights against the traumatic experience, nearly being trapped in its own nightmare. But after overcoming its instincts and regaining control of its dreamscape, it decides to face its fears head-on, literally confronting the impact.