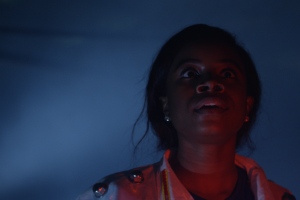 A young astronaut, Jadi, finds herself in the ruins of a space station after a horrific battle. Her only way to safety is the Escape Pod. An Alien Menace, who’s been slaughtering the last survivors, is the only thing standing between Jadi and her salvation. Jadi will have to make her way though the smoldering remains of her ship and face a monster from another world if she is to survive, but will she make it?