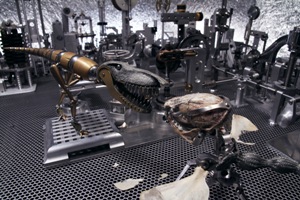 Ten years in the making, Fabricated is a stop-motion animated miniature epic. It is the story of the machines left behind by a dying industrialized society. From a pile of bones and scrap metal, a creature named Oto is assembled and sent off. As he makes his way through an old world that is dying and a new world struggling to be born, Oto begins to sense that he may have a part to play in the evolution of his imperfect kind.