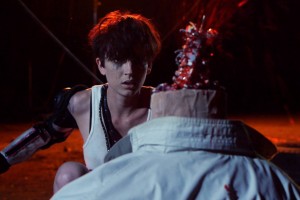 There’s nothing left in sister’s Alexandra and Kara’s world except for death and a rare, crimson colored gem that is extremely valuable. When Kara finds one of the gems left on a dead body, she is kidnapped by a group of hunters bent on retrieving the gem. Alexandra, assuming her sister is dead, tracks down the hunters to unleash her own brand of vengeance against what’s left of humanity.