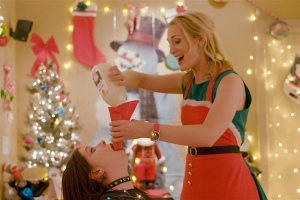 A moody goth girl (Scarlet) deep in the throes of artistic creation is interrupted by her neighbor’s incessant Christmas music. When Scarlet confronts her cheery, pressed and perfect neighbor (Betty) she finds out looks can be deceiving, and to never underestimate the power of Christmas cheer.