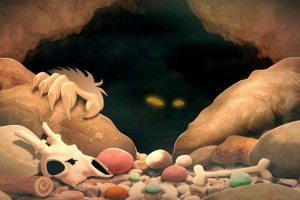 Inuit oral history is filled with strange beings and supernatural creatures. One of these feared land spirits is the Ogress of the Gravelbank. This cruel being was known to lure children into her lair, and trap them there. All that perish in that cave remain there as spirits or animated corpses.

This short vignette introduces viewers to this malevolent spirit who is unknown to all but the people of the far north.