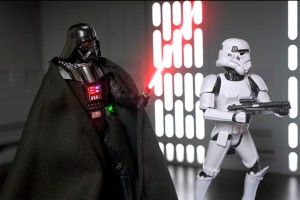 This award-winning, 2-minute Star Wars fan film was produced for Lucasfilm’s #GoRogue contest shortly before the theatrical release of Rogue One: A Star Wars Story in December 2016. It takes the premise of Pixar’s Toy Story and places it in a live-action setting with stop-motion animated Star Wars toys to tell a touching story between a father and daughter.