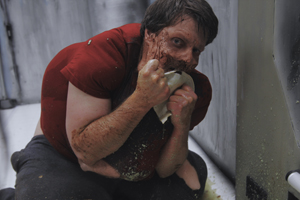 Directed by James Cadden; Based on the story by Josh Saltzman; Produced by Rebecca Bell

Mark and Jenny volunteer to be locked in a room together for one month as part of a paid experiment. They’re provided meals through a dispenser, which they ravenously devour because they’ve been gripped by an insatiable hunger. Eventually, the food stops coming, but they’re still hungry.