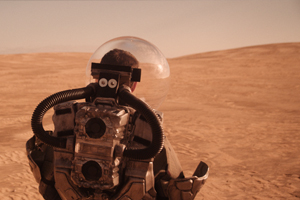 In the not-so-distant future, a headstrong scientist, Gill, test pilots a prototype teleportation suit in the middle of the desert. Over the radio, her overbearing partner and engineer argues with Gill about unauthorized software changes. Eager to prove herself right and him wrong, Gill missteps, and the suit malfunctions. Now fighting with her only lifeline, Gill must avoid disaster and fix the suit as it teleports her at random across the globe.