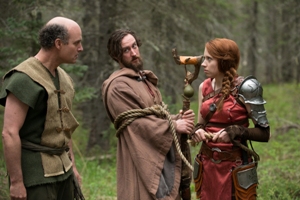 A squabbling team of mystical misfits race an evil necromancer on a quest to find a mysterious orb. If the team can’t set aside their differences and reach the orb first, the Lich Lord will regain his power, unleash his undead army, and bring about the total annihilation of the realm. Legend of the Lich Lord is a comedic sword and sorcery meta-mockumentary based on the award winning web-series One Hit Die.