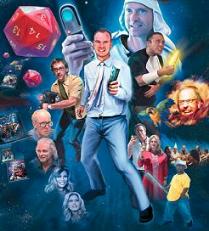 Written and Directed by Christopher Folino.

Gamers is a comedy about the lives of four hapless friends (and one obsessive interloper) and how they evolve over a 23-year span. It centers on a single day when they are about to break a world record for hours spent role-playing a game called DND, or Demons, Nymphs, and Dragons. The sacrifice, the obsession, the blind dedication… This is their true story.

Featuring performances by John Heard, Beverly D’Angelo, William Katt, and Kelly LeBrock, as well as the voices of Michael Bell and Richard Blade.