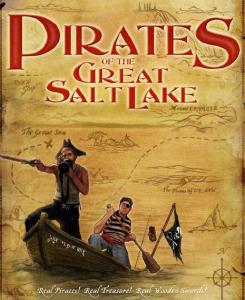 Kirk Redgrave (Kirby Heyborne) and Flint Weaver (Trenton James), outcasts and loners in their landlocked home, have dreams to become the best pirates the world has ever seen. They take the pirate code to heart and set out for a life of pillaging and plunder. Still, pirate life isn’t all it’s cracked up to be, until they stumble across a long lost treasure map that has the power to not only fulfill their wildest pirate dreams, but curse them as well.

Now all they have to do is find the treasure, break the curse, get the girl, defeat the evil pawn shop owner (Larry Bagby), and show themselves to be true pirates. Pirates of the Great Salt Lake is a tongue-in-cheek, camp comedy/fantasy that vividly captures the dreams of youth and  explores the human plight of acceptance.

Saturday, 7:00 PM.  Q&A with director E.R. Nelson after the screening.