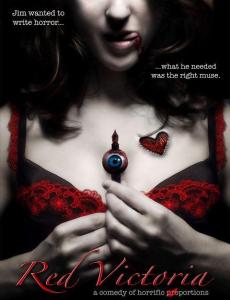 A Comedy of Horrific Portions

Jim (Tony Brownrigg) is a writer, down on his luck because his emotional dramas just aren’t selling. Jim begrudgingly agrees to write a horror script when his agent insists that’s the only way to make ends meet, but he lacks the inspiration for this unfamiliar genre. What he needed, was a muse.

But little did he know a muse was watching, an undead one named Victoria (Arianne Martin).

After introducing herself to a shocked Jim, she begins her work. Intent on teaching Jim about horror, she begins killing his friends and family. Jim, after enlisting the help of a true horror fanatic named Carl (Edward Landers), attempts to both write, and scheme to put an end to this murderous muse once and for all. Can Jim finish his horror movie to Victoria’s satisfaction before everyone he knows is slaughtered?

Q&A with Tony Brownrigg, Edward Landers, and Arianne Martin  after the screening.