A groundbreaking new noir film, Yesterday was a Lie is a “soulful and thought provoking journey” (Talking Pictures). Award-winning writer/director James Kerwin “weaves a tale of intrigue and metaphysical darkness” (Ain’t It Cool News) that teases the boundaries of reality. 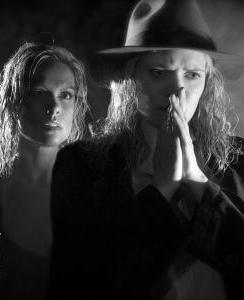 Kipleigh Brown stars as Hoyle, a girl with a sharp mind and a weakness for bourbon, who finds herself on the trail of a reclusive genius. But her work takes a series of unforeseen twists as events around her grow increasingly fragmented… disconnected…surreal.

With a sexy lounge singer (Chase Masterson of Star Trek: Deep Space Nine) and a loyal partner (Mik Scriba) as her only allies, Hoyle is plunged into a dark world of intrigue and earth-shattering cosmological secrets.