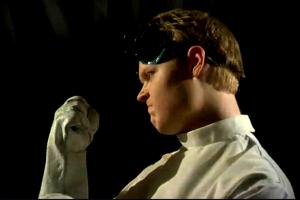 Set sometime in the 1990s, Horrible Turn serves as an unofficial prequel to the 2008 Internet sensation, Dr. Horrible’s Sing Along Blog (Joss Whedon). Billy Buddy is a geeky, socially awkward whiz kid with lofty ambitions of changing the world…for the better. His dreams of living happily ever after with his Aussie dream girl, Katie Kitty, are jeopardized when a group of super-villains calling themselves the ‘Evil League of Evil’ threaten to attack the school. Billy must reluctantly recruit his brash and self-absorbed schoolmate, Kenny Hammerstein, to help derail the terrorists’ evil plots. Horrible turn is a comedy/musical chronicling the transformation of the innocent, naive Billy Buddy into the low-rent, hard-luck bad-guy, Dr. Horrible.